Growing Up In Disneyland 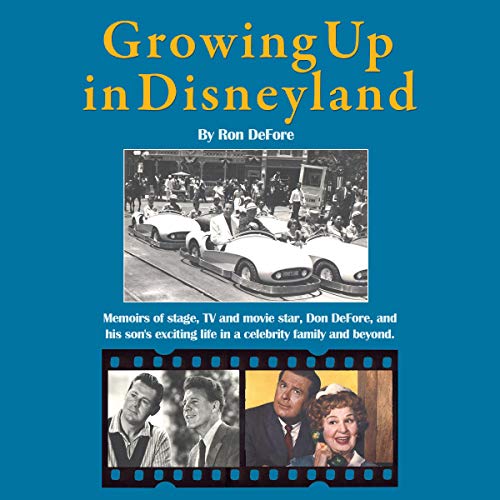 Growing Up in Disneyland is part biography about Ron’s father, Broadway, movie, and TV star, Don DeFore, and his own autobiography. Don DeFore earned a star on Hollywood Boulevard’s Walk of Fame and was a household name in the 1950s and ’60s. He co-starred in numerous TV shows, live theater, and feature films with many Hollywood legends. He is best known for The Adventures of Ozzie and Harriet, in which he played the next-door neighbor, “Thorny”, and his costarring role as “Mr. B” in the 1960s TV series Hazel. The book includes much of Don’s unpublished autobiography, Hollywood-DeFore ‘n After.

Growing Up in Disneyland is a metaphor for Ron’s life growing up in a celebrity family filled with Fantasyland adventures he equates to a Forest Gump-type life, from meeting the Beatles, Beach Boys, Led Zeppelin, and other celebrities as Associate Director of the Steve Allen Show. His nearly 20 careers include a mid-life crisis as the Flying DJ at an LA discotheque to political positions within the Reagan Presidential Administration to establishing his own company. is also to be taken literally, as Ron spent much of his youth in Disneyland where his father owned “Don DeFore’s Silver Banjo Barbecue” restaurant in Frontierland. Ron and his brother, Dave, have given presentations to various Disneyland interest groups after which many attendees suggested, you should write a book.

Growing Up in Disneyland will be enjoyed by any age group from baby boomers that remember Don DeFore’s many beloved acting roles to those that don’t but are curious how life was in the good old days, especially growing up in a Hollywood celebrity family. Ron has had so many careers and adventures along the way that listeners will have much to keep them gripped.