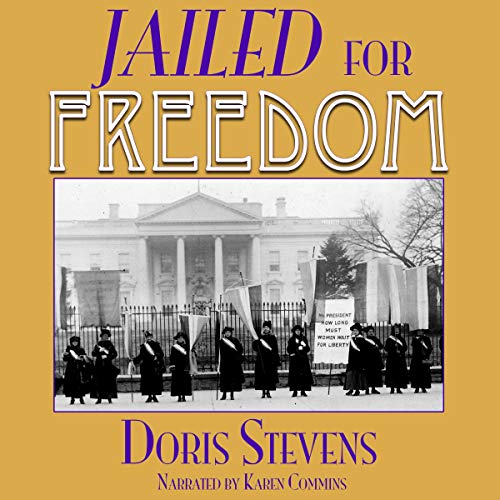 Giveaway codes for this audiobook are only redeemable by residents of the USA, UK, EU countries, Canada and Australia, and only listenable via the Authors Direct app for iOS and Android devices available at authors-direct.com. If you are not in USA, UK, EU, Canada or Australia, please do not request this audiobook.

Although half of the population, women were treated as second class citizens in the United States and denied the fundamental right to vote. In 1872, Susan B. Anthony dared to cast her vote in a national election. She was arrested, tried, and convicted of the crime of “voting without having a lawful right to vote”.

Women continuously asked for the vote. They pleaded for it for decades. Some states granted enfranchisement, but Congress could not be persuaded to adopt an amendment guaranteeing women their long-overdue national enfranchisement.

Alice Paul, a quiet but compelling leader, learned about militant tactics in England from the Pankhursts. She returned to the United States and led a group of women who became the National Woman’s Party in a suffrage parade in Washington, DC. This 1913 parade occurred the day before Woodrow Wilson was inaugurated as president. These determined women pressured Congress and publicly reminded Wilson every day of the suffrage issue until he surrendered.

This thrilling, firsthand account from suffragist Doris Stevens details the organized protests that hundreds of courageous women from across the country undertook in DC between 1913 and 1919, as well as the brutal consequences they had to endure. They were ridiculed, persecuted, jailed, beaten, and forcibly fed. Nevertheless, they persisted until they eventually prevailed.

Jewel Audiobooks is proud and honored to publish this captivating audiobook in recognition of those remarkable, resilient women and in celebration of the 100th anniversary of the ratification of the 19th Amendment to the US Constitution.

To request this audiobook, complete the form below.
Your promo code will display on the next screen.