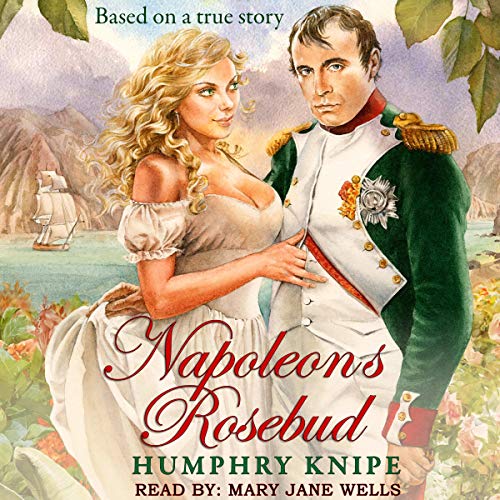 “Pitch perfect prose … This is a magnificent and sometimes blissfully raunchy book. You will never again think history is dull.”  (Amazon Review)

“Fans of Outlander, welcome to your next, hot historical drama … A wild adventure complete with secret identities, love affairs and a submarine … Highly recommend this one for the crosstown commute! ” (Audible Review)

“Knipes has masterfully woven his family stories and historical research into a fascinating tale.” (Amazon Review)

“… will have you turning pages to find out what happens next.” (Amazon Review)

Intrigue, deception, love abound in this fascinating tale of the author’s great, great, grand-aunt and one of the most famous men in history!

You are the high spirited 19-year-old daughter of a penniless widow, born and brought up on an isolated, windswept South Atlantic island, a girl with virtually no prospects, when out of the blue the most famous man on earth falls into your lap.

Still smarting from his defeat at Waterloo, still the hero of Liberals everywhere, Napoleon has been exiled to tiny Saint Helena, because it is the remotest and most easily defended island in the British Empire. But far from being broken by defeat, Napoleon’s fertile imagination seethes with escape schemes. He meets you on his first evening on the island and instantly knows he has found what he is looking for: someone to set him free.

Nicknaming you “Rosebud”, he sends you to Europe with a secret message for Lord Byron, an ardent supporter. You escape the notorious poet’s clutches just in time to get involved in a madcap scheme to rescue Napoleon by submarine, a new-fangled American invention. Then, you return home to give him his final victory.

This clandestine affair between an imprisoned emperor and the island girl who tries to set him free has a very personal backstory, writes the author. When he was a child back home in South Africa his grandfather, who emigrated from Saint Helena in the late 1880’s, often spoke about his family’s acquaintance with the great man. A big print of Napoleon hung on his living room wall. “Remember that we have been touched by greatness,” were his enigmatic last words.

When he researched this claim many years later and discovered the Rosebud legend he realized why his grandfather, a Victorian gentleman, hadn’t gone into detail. Charlotte Knipe, said to be the most beautiful girl on Saint Helena at the time, is on record as having been a frequent guest of the emperor and rumored to have been his lover. Rosebud is the author’s great-great-grandaunt. The “touch of greatness” was Napoleon’s.