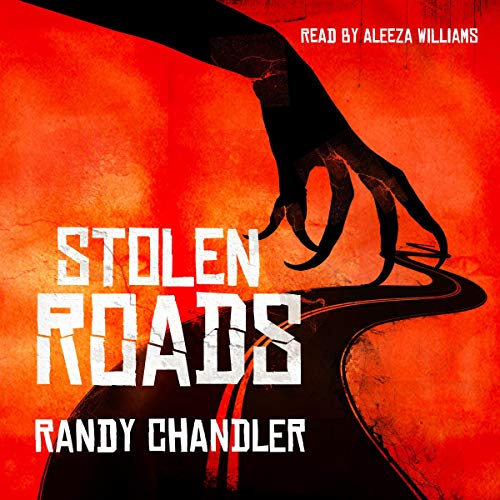 “It was like I was riding on a stolen road, like somebody’d just shanghaied the road and plopped it down in some foreign land.” Thus, “stolen roads” entered the esoteric lexicon of popular culture.

William Kidd’s travels on stolen roads begin when he’s a boy on leave from a psychiatric hospital and survives a car accident that kills both his parents.

Although hallucinations are nothing new to him, Kidd knows the otherworldly thing crouched on his dying father’s chest at the scene of the accident is no hallucination. Nothing in his mental inventory of the planet’s natural creatures jibes with this pebble-skinned thing nearly as big as a man, a terrifying beast with spiky shoulders and lizard-like snout, its long knobby limbs folded insect-fashion as if it might suddenly leap or fly away without warning.

The beast claws the boy’s face, giving him an indelible totem-mark scar he still wears as a young man when he goes on the road in search of the creatures he calls “trocs.”

Kidd soon meets the Fluckers, a married couple claiming to have happened upon a “lost road”, and they entice him to join them on an expedition to ride a suspect blacktop into what may be an alternate world.

When Kidd’s psych-hospital alumnus Rose Rivers the trippy earth-obsessed rock hound pops back into his life, she invites herself along on what she calls a trip to The Big Nowhere. Rounding out the team is Rita Younger: dive bar owner, former biker club member and acknowledged “badass babe.”

But The Big Nowhere is filled with otherworldly dangers. And the road home could be a dead end.

Buckle up and hit the road for a thrilling ride into the dark fantastic. A literary collision of horror and fantasy on the road to a new kind of hell.