The Declaration, The Wind, & The Light: A Tales from a Revolution Collection 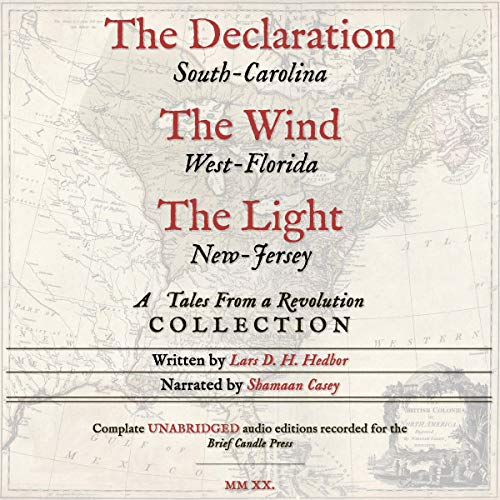 The question of how the American colonists made the long trip from being subjects of the British king to being citizens of the independent United States has nearly as many answers as there were people. Within these collected tales, you’ll be transported to the time when the American Revolution tested how a tobacco farmer, a Spanish sailor, and a Quaker blacksmith would all navigate the tumultuous times of the American Revolution.

A long-lost document and a forgotten heritage.

Right when Justin Harris thought he’d secured his family’s comfort on their farm in the upcountry of colonial South Carolina, marauding British forces came to threaten everything he held dear.

When he takes up arms in support of the revolution, how will his actions reach across the centuries to change his descendants’ lives?

Gabriel is a simple sailor, doing the bidding of his captain and king, when he is swept up in a storm that changes his life in ways that he could never have anticipated.

Carlotta yearns for her lost home and is searching for her lost husband, but both remain elusive in a world that has been turned upside down by forces far outside of her control.

When the storm that is Governor Bernardo de Gálvez breaks over them both, will either of them – or their world – ever be the same?

Caught between the impossible and the forbidden.

As a blacksmith in the quiet town of Trenton, New Jersey, Robert Harris was accustomed to working with the challenges of fire and steel. The outbreak of open warfare, though, will test his Quaker faith and its command to avoid all violence.

With enemy forces occupying the town and a former business associate determined to destroy his family and friends, can Robert find a way to protect his pursuit of what’s right?