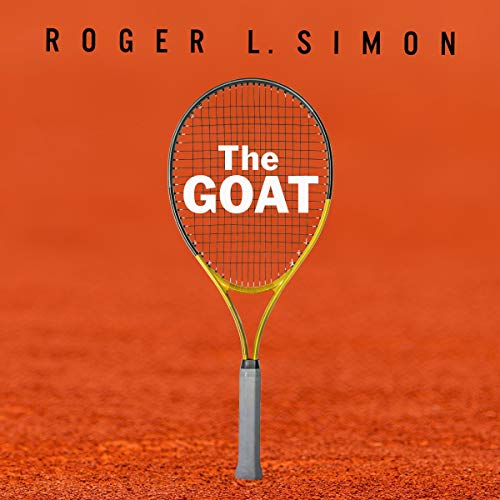 Whatever happened to Dan Gelber – the divorced screenwriter who journeyed to Nepal in his seventies, only to plunge to his death off of Mt. Everest?

And just who is Jay Reynolds, the mysterious 20-year-old tennis prodigy who appears out of nowhere to battle Rafael Nadal at the French Open and Roger Federer at Wimbledon and become the new hope of American tennis, possibly “the greatest of all time”.

Award-winning mystery writer (Moses Wine series) and Academy Award-nominated screenwriter of Enemies – A Love Story, The Big Fix, and Bustin’ Loose, Roger L. Simon, answers these questions and more in The Goat, his first stand-alone novel in years. If you love sports, if you love life, if you’d like a second life, this book – funny, touching and sometimes scary, already talked about as the greatest novel about tennis ever authored – is a pause-resisting listen.

Called the greatest mystery writer of his generation by Ross Macdonald (Lew Archer series) and Nicholas Meyer (The Seven Percent Solution), Roger L. Simon has won or been nominated for multiple awards for his fiction by the crime writers of Great Britain and the mystery writers of America.

As a screenwriter, he has received an Oscar nomination for his adaptation of Nobel Prize-winning author Isaac Bashevis Singer’s Enemies, A Love Story and written for such stars as Richard Pryor, Richard Dreyfuss, and Angelica Huston. Also a journalist and columnist, Simon has written for The Wall Street Journal, The New York Times, The Washington Post, and Real Clear Politics, among many others. He appears frequently as a commentator on talk radio and cable TV.