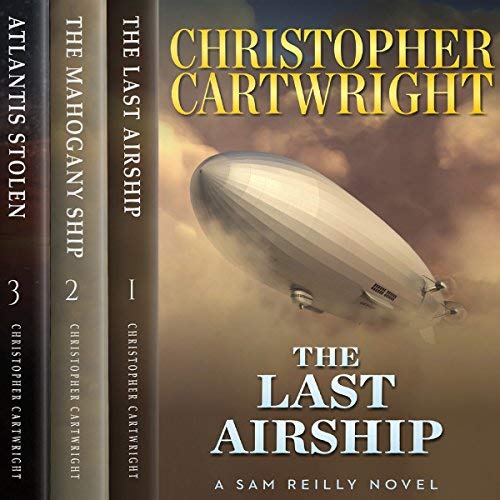 The Last Airship: In 1939, a secret airship departed Nazi Germany in the dark of night filled with some of the most influential people of its time. Its cargo: a complement of rich Jewish families carrying their most valuable possessions. One such item among them was as dangerous as it was priceless. The airship never reached its destination.

In 2015, Sam Reilly, a marine biologist and wealthy son of shipping mogul James Reilly, discovers a missing clue about the lost airship and what follows is a violent treasure hunt kept secret by the most powerful men in the world today, driven by their greed and need for that which all are motivated: the opportunity for unlimited power.

The Mahogany Ship: An ancient shipwreck. A two hundred year old mystery. A plague that’s destroying all marine life. A pyramid half a mile below the sea. And a puzzle that must be solved before it destroys the human race. On the 18th of February, 1812, the Emily Rose became shipwrecked on the southern coast of Australia. The survivors are forced to walk nearly 1,000 miles through the unexplored land to reach the only settlement Sydney Cove.

Nearly 200 miles inland, they come across the remains of a monstrous ship, far bigger than anything the British Navy had ever constructed. Through basic communication achieved with the natives, they learned that the ship had been there for a very long time, maybe 1,000 years. Despite the details of the mysterious ship in the journals from the survivors of the Emily Rose, no evidence that the mahogany ship ever existed was found – until now.

A mining exploration in Australia takes a core sample 500 feet below the surface of a deserted mountain. The sample returns no evidence of gold deposits but something much more valuable – a single Spanish gold coin dated 1518. Could the origins of this coin finally reveal the existence of the fabled mahogany ship?

Atlantis Stolen: A civilization stolen from the history books. A billionaire’s obsession to unlock its secrets. A brotherhood determined to hide the truth. And time is running out. Only a handful of people know what destroyed the ancient Atlanteans, whose very existence is a secret that they will kill to protect. Unfortunately, the very same catastrophe that destroyed that once proud civilization is drawing near once more. The question is, can marine biologist Sam Reilly discover the truth in time to prevent it?